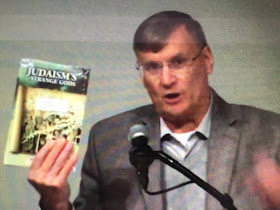 If one picture is worth ten thousand words, today we are offering you the equivalent of 20,000 words. The first is a photo (above) of nationally known patriot-Pastor Dr. Church Baldwin holding aloft from his pulpit a copy of my banned book, Judaism’s Strange Gods: Revised and Expanded. His church has sold hundreds of copies due to his testicular fortitude and vision. He’s a real mensch.

Next we turn your attention to the wimps of the post-Renaissance “Catholic” Church. Reproduced above is a scan from a bulletin circulated at a “Catholic” church on Long Island, New York last Sunday, equating the “BDS” boycott campaign against Israeli murder and dispossession of the Palestinians, as well as Minister Louis Farrakhan and his two alleged supporters in Congress, with “evil” and "anti-Semitism.” Why doesn’t this “Catholic” treachery surprise us? Perhaps because the popes are in fact crypto-rabbis and many “Catholics” in the pews are the walking dead.

Moreover, yesterday, in the letters section of the Chicago Tribune, representatives of the "Illinois Holocaust Museum" attacked Farrakhan for hosting this writer: “...on Feb. 17, 2019, thousands rallied at Chicago’s United Center as Louis Farrakhan and the Nation of Islam teamed up with a Holocaust denier and anti-Semitic ideologue to attack Judaism and blame numerous ills of modern society on Jews.”

Lies and ever more lies. I don’t deny any holocaust, including the one transpiring now: the Israeli holocaust against the Palestinians.

The truth they won’t print: in Chicago Minister Farrakhan and this writer held out a hand of liberation and assistance to Judaic people enslaved by the Babylonian Talmud, offering them the love of Jesus Christ. The “Holocaust” was not mentioned.

We pray and work for the day when The Holocaust of All Time, the Crucifixion of Jesus Christ on Calvary, will regain its rightful center place in the hearts and minds of our people.
________________

Judaism’s Strange Gods: Revised and Expanded is for sale here