Since the publication of our book, Adolf Hitler: Enemy of the German People, neo-Nazis have been as vicious toward us as the Zionists (including issuing death threats and calumniating our Truth Mission far and wide). They are not going to appreciate that today we are once again fulfilling our duty to revisionist history by raising the issue of the mystery of Adolf Hitler’s support for the publication of the Babylonian Talmud in Nazi Germany, at a time when he had banned hundreds (if not thousands) of books, including volumes authored by German Christian Conservatives.

We have long been aware that Lazarus Goldschmidt’s "Judischer" verlag (publishing house) operated without obstruction under the Nazis, and that in Berlin in 1935 Hitler permitted the printing and general distribution of Goldschmidt’s multi-volume Talmud translation (view a photo of one of the volumes at this link). In the event anyone would deny it, a few years ago we purchased an original printing of one copy. We let the matter rest there and proceeded to other projects.

Now there has been a development. Sefaria.org is the premier online publisher of the Talmud Bavli in the West, as well as cognate sacred rabbinic texts (offered entirely free of charge and backed in part by the Rothschild Foundation). This year Sefaria debuted all of Goldschmidt’s German Talmud online. To announce the event, Sefaria produced a lengthy video to discuss the Goldschmidt Talmud and interview researchers and surviving members of Mr. Goldschmidt’s family. What piqued our interest was that in the course of the video all of the speakers avoided discussing how it came to pass that the book-banning Führer permitted the Talmud to be published, in a sturdy hardcover edition for mass circulation in German-speaking lands.

This is not unprecedented. Something like it occurred in 16th century Italy where a putative foe of the Talmud secretly sponsored it. In our book, The Occult Renaissance Church of Rome, we offer evidence testifying to the support which anti-Lutheran Medici Pope Leo X gave to the publication, in Venice, of the Bomberg Talmud. Though gullible Catholics imagine this pope to have been anti-occult, he actually was responsible for the publication of the Talmud in the finest edition ever printed up to that time. Pope Leo X was indubitably part of the occult movement which had captured the papacy from the time of Marsilio Ficino and Pico della Mirandola, after the rise of the Medici’s Platonic Academy in Florence in the fifteenth century.

As with the beguiled believers in the integrity of Leo X, Hitler’s naive acolytes imagine that he was anti-occult. But as we demonstrated in Adolf Hitler: Enemy of the German People, he was a creature of the occult Thule society from the earliest days of his post-First World War career as a political spy, and then as a leader of the fledgling National Socialist movement. Yes, he interdicted his occult rivals among the Freemasons and similar organizations, in the same way that General Motors seeks to crush Ford. But few among us would be so puerile as to mistake the rivalry between Ford and GM as representing the objective of the abolition of cars. Because Hitler obstructed rival occult groups it does not compute that he himself was free of the eternal pagan psychodrama and its clandestine manifestation on the Right. The Führer was an occult agent. It was occultism according to the “Aryan” gnosis in which he had been indoctrinated. If you doubt it, take the time to read our book. 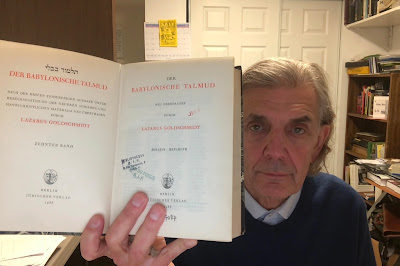 We have referred to the “mystery" of Adolf Hitler’s support for the publication of the Goldschmidt Talmud. At present it remains just that. We don’t pretend to have plumbed the depths of his decision to permit its public debut and publication in Germany (about which there was nothing covert), rather than having the Nazi secret police suppress it. This is a subject deserving detailed investigation by a scholar fluent in German and with access to the archives, which is an apt description of Sefaria’s Rothschild-funded personnel. To the best of our knowledge however, thus far they have scrupulously avoided any such inquiry. This is queer, given the fact that it is the most striking aspect of the case, after Lazarus Goldschmidt’s prodigious accomplishment in translating the entire Gemara (Babylonian Talmud), from Aramaic to German.

In attempting to unravel the mystery, one lacuna that ought to be factored are statements by revered Orthodox gedolim, such as Grand Rabbi Menachem Mendel Schneerson and the powerful spiritual leader of the Israeli political party Shas, Rabbi Ovadia Yosef (both of whom are recently deceased). In their theological discourses they asserted that Hitler was an avenging angel sent by God to punish German Judaics who had abandoned submission to the Talmud.

The documentation for the largely recondite fact of qualified rabbinic esteem for Hitler will be found in our banned textbook Judaism Discovered (pp. 59-61). Judaic-Germans were among the most elite Judaics in the world, engaged in teaching and advancing mathematics, physics, chemistry and philosophy. Most had served honorably and patriotically in the German military during the First World War, and most were becoming ever more estranged from the Talmud and Talmudic rabbis — increasingly seeking to assimilate — which is a horrible moral transgression in Talmudism; infuriating to its leaders and adherents.

Then Hitler comes to power and lumps the increasingly secular and assimilationist Judaics who are in many cases making major contributions to Germany, with the benighted followers of the troglodyte halacha —largely extruding and extirpating the former (the majority) — hence, the encomium, divine “avenging angel” bestowed upon him by leading post-war Talmudists such as Yosef and Schneerson, and their epigones.

It’s our job to study these questions and bring them to your attention, and it’s the reason why you read what we write. We don’t confine our scholarship to a claustrophobic wing of the political spectrum. We defy taboos established by partisan ideologues on either side of the Judean/gentile divide. One measures a circle beginning anywhere. We choose to measure it at the point where knowledge, however inconvenient to fanatics, is advanced to the highest degree of incandescence.

Michael Hoffman is a former reporter for the New York bureau of the Associated Press, the editor of Revisionist History® newsletter, and the author of ten books, three of which have been banned by Amazon. The sale of Mr. Hoffman’s work was canceled by Paypal in 2017. He was banned from YouTube on August 26, 2019. As an independent scholar without institutional affiliation, his work is made possible by donations from truth-seekers and the sale of his books, newsletters and recordings.

The backlash against our work is tremendous whenever we raise historical issues not friendly to Hitler-enthusiasts. It’s underway again

Curious Mr Hoffman at behind the scenes. Have you spoken with David Irving about this Hitler Talmud business? Gotten his take or even know if he came across this historical fact during his research for Hitler’s War?

Further, on a personal note, what do you think Ernst Zundel’s reaction would be were he alive today? Hitler of course was “his favorite Nazi”.

Keep up the diligent work sir, I am a Catholic Identitarian in the fight for our people and our people need to know that fighting for one’s kin doesn’t necessitate Hitlerism.
--
C. C.
__________

I have not solicited David Irving’s opinion. Our blog is public and if he reads it, or if someone alerts him to it and he wishes to comment, he would be welcome.

As for anticipating the late Ernst Zündel’s reaction to news of the fact of Hitler’s permission for the Talmudic verlag flourishing unmolested in Nazi Berlin, toward the end of his life he became psychologically captive to his wife, the double-agent Ingrid Rimland. According to his son, Pierre Zündel, at his death he willed her all of his possessions.

For years she operated a racket soliciting book and financial donations from revisionists and Germans throughout the world. She received priceless archives and whole libraries from gullible people believing the elderly Rimland was going to preserve the huge and priceless cache of photos, files and books donated to her, and showcase and allow access to them at her Tennessee property’s “library” and “meeting hall.” When she died a few months after Ernst, she allegedly willed those precious possessions to a fervently anti-revisionist person. It appears that those materials have somehow largely disappeared, She neutralized whole segments of revisionism. After Ernst died, Dr. Robert Faurisson told this writer, “Ingrid is a disgrace.”

We have compassion for whatever happened to Ernst's judgment during the seven years of the sadistic confinement he suffered in Canadian and German prisons for thought crime. It no doubt left him vulnerable to the wiles of the double agent.

In terms of an institutional framework, there’s not much left of WWII revisionism at the present time; near total destruction on the organizational plane has been achieved.

Ingrid completed what the mid-1990s arson at Zundelhaus in Toronto began: the wipeout of Ernst’s huge deposit of manuscripts and forensic materials, including Ditlieb Felderer’s more than 20,000 color slides and pictures of the Auschwitz-Birkenau slave labor camp which he photographed in the late 1970s — an incalculable loss. It seems Ingrid got rid of the rest, posthumously — from the grave, as it were.

Some of the archives in her possession that were allegedly willed to the anti-revisionist person, turned up —I don’t know how— in the hands of un-indicted Oklahoma City bombing conspirators. They used it as bait to try and lure authentic revisionists into their net. This has many of the earmarks of an intelligence operation. It will happen again, because at the very least revisionists should have learned a lesson from this macabre tragedy, studied it and made it known. It’s so embarrassing however, that they cannot bring themselves to confront their own naiveté and folly. History repeats under such circumstances.

To anticipate an objection: yes, Rimland was well aware that the person to whom she is reputed to have willed her estate was a foe of revisionism.

Nor was it the first time she had compromised the cause of WWII dissident history. A genuine account of how Ernst came to be arrested and deported to Canada for alleged violations of US immigration law has yet to be told. It would take a full-time sleuth months to compile a dossier on the appalling acts of treachery that were perpetrated by this Kim Philby of revisionism.

Lastly, one of the death threats this writer received after I authored the volume, Adolf Hitler: Enemy of the German People, came from an associate of one of the un-indicted Oklahoma City bombing conspirators mentioned above. The associate sent a second one more recently, insinuating that I do not have long to live. It sits in a file of threats of a similar tenor sent by Zionist and Talmudic criminals and fanatics. Meanwhile, the boycott and calumny stemming from the writing of the Hitler book continues, more intense than ever. Such are the vicissitudes of the heretic.