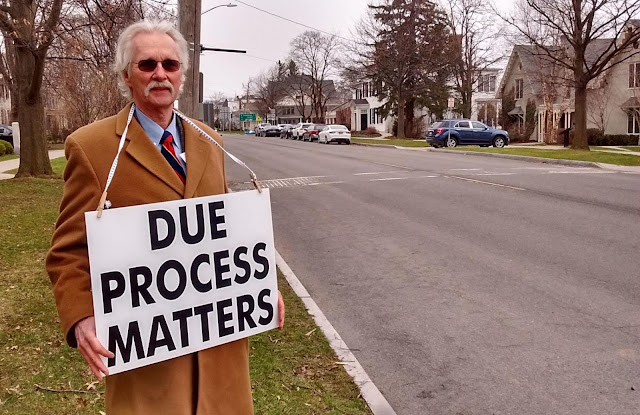 Daniel McGowan, Professor Emeritus of Economics at Hobart and William Smith Colleges in upstate New York, and a noble (and smart!) campaigner for Palestinian rights against Israeli racism, is back in the news:

Dan’s a born fighter who we can’t help but admire on the basis of his valor and persistence alone.

In this case he’s battling the hyper-sensitive pc thought police at Hobart and William Smith Colleges where he taught for decades, and he’s doing so in the street.

The colleges' "Bias Incident Response Team" (I kid you not), terminated his e-mail privileges after he poked mild fun at a solemn lesbian gathering. There was no appeal or due process.

Shades of Maoist self-criticism, he was told his e-mail would be reinstated only if he wrote a four page statement concerning what he has learned from being such a bad boy.

Dan is the former head of Deir Yassin Remembered (https://www.deiryassin.org), which is an organization that seeks to kindle the memory of the Israeli holocaust against the Palestinians — the murderous bias against them which is seldom an issue for any American “response teams.”

Here is a First Amendment Victory in Texas where we are fighting our own little "holocaust against the Palestinians" brought about by an almost unanimous vote FOR a blatantly unconstitutional law two years ago in the Texas legislature.

Published on
Friday, April 26, 2019
'Landmark' Victory for First Amendment as Court Strikes Down Texas Anti-BDS Law
Bahia Amawi, a speech pathologist for Round Rock School District who lost her job due to the law, celebrated the ruling as "a huge win not just for me, but for everybody here in Texas."
by
Jake Johnson, staff writer


In his 56-page opinion (pdf), Judge Robert Pitman of the Western District of Texas ruled the state’s law violated the First Amendment by threatening to “suppress unpopular ideas” and “manipulate the public debate through coercion.”