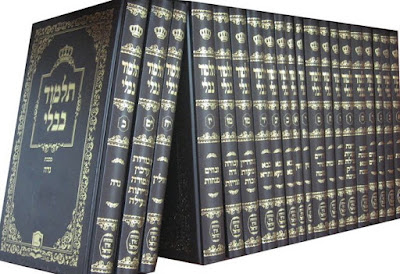 This autumn I am studying the Talmud Bavli (Bavli =Babylonian), tractate Sanhedrin, from 49b to 113A.

My objective is to bring accurate knowledge of Orthodox Judaism’s holiest book to the attention of the public and to do so in accordance with exegetical principles free of hatred and bias.

1. To the claim that I am "quoting out of context” — I urge readers to access tractate Sanhedrin and study it in an uncensored edition, and judge for yourself. I am hiding nothing and I am taking nothing out of context. Today’s study is entirely consonant with the contents of the Talmud as a whole, and for that matter, with the rabbinic halacha (law) derived from it.

2. With regard to the risible allegation that the contents of the Talmud Bavli have little or no force of law, and are simply a record of debates, cf. "The Babylonian Talmud: Just a series of debates?” (Scroll down on this page http://talmudical.blogspot.com until you come to the headline above, highlighted in red-colored type).

The following is the law (halacha) of Orthodox Judaism

From Sanhedrin 54b (texts in the original Aramaic in which the Talmud was written): 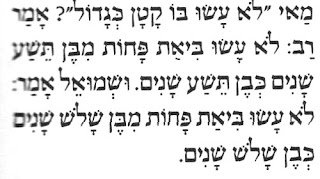 “If a man sodomizes a minor under the age of nine, whether actively or passively, he is exempt.”

For a Judaic male’s sodomy upon a boy "to have the legal status of full-fledged intercourse the minimum age is nine years. The Torah does not deem a younger boy to be like an older boy.”
_______________ 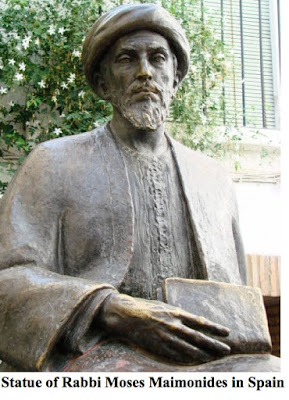 The Talmudic exemption from punishment for sodomizing a boy under the age of nine cites the “Torah” as its source.

This is a libel against the Torah (the Hebrew “Old” Testament). Nowhere does the Word of God in the Holy Bible state, imply or in any way insinuate that homosexual intercourse with a boy under the age of nine renders the sodomite-perpetrator legally “exempt" from the punishment due for the transgression of child molestation.

This Talmudic halacha, were it a law in Christianity, would be massively publicized repeatedly by the mainstream media.

If this law was present in Islam it would be massively publicized repeatedly by right-wing Churchianity, which publishes and promotes numerous books, pamphlets and radio and television broadcasts purporting to “expose” and “tell the real truth” about Islam. Yet these Church-goers who are putative “followers of Christ” tend to flee in dread at any thought of issuing corresponding publications relating to the exposure of the contents of the Babylonian Talmud and the creed predicated upon it.

America's child-molestation epidemic has a silent partner, in which the churches and the media are complicit. 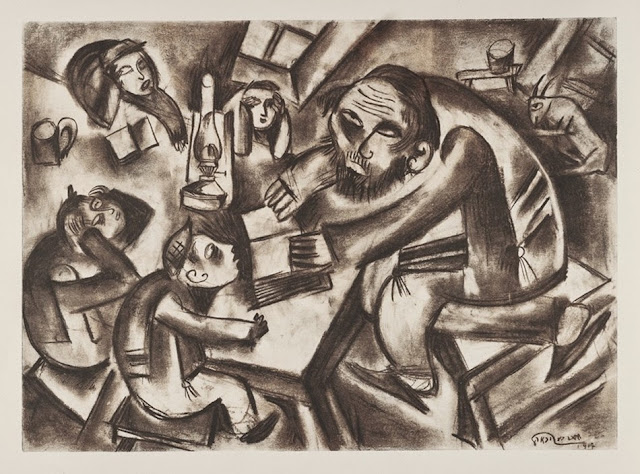 We state these facts out of love for all people, and in particular  Judaic persons, for surely the first victims of the halacha at issue are Judaic boys who are under the authority of the Torah she beal peh (תורה שבעל פה‎)— the oral law of the Pharisaic “sages” — which is the source of the sacred texts of the Mishnah and Gemara which comprise the Talmud Bavli.

By Michael Hoffman: Judaism Discovered: an encyclopedic reference text on Orthodox Judaism intended for specialists. Judaism’s Strange Gods: a condensation of the preceding book intended for the general reader.

By Alexander McCaul, Professor of Hebrew and Rabbinic Literature at King’s College, London: The Talmud Tested, with an introduction by Michael Hoffman.

By Prof. Johann Andreas Eisenmenger: The Traditions of the Jews, with an introduction by Michael Hoffman.
___________

Michael Hoffman’s writing and research is made possible by donations from truth-seekers. Please help.
___________

Hoffman: the reason u're such a noxious, corrosive, and subversive influence in USA and West is demonstrated by ur statement, this article of urs, "[w]e state these facts out of love for all people, and in particular Judaic persons...."

A certain kind of "love" and respect for humanity in general are justified following Christ and St. Paul, but not any special sort of positive regard for Jews--for that would be against justice and honesty, hence Christ and truth.

So Jews must be resisted and exposed, MOST ACTIVELY--they are leaders of the present satanic counter-culture which continues to prevail and to presage most horrific prospects, as for gross massive genocide in accord w. their Agenda-2030.

Key to this satanic/Judaic culture is "midrash" SUBJECTIVISM by which reality and Torah are "interpreted" to whatever Jews want and say it is, thus MAKING THEMSELVES GOD, creator of reality--this in opposition to Christian TRUTH founded in the OBJECTIVE, God-given world.

And pretext to this satanism and subjectivism, first impressed upon the youth, is Pelagian heresy of "good-evil" against Christian teaching that humans are sinners in accord w. objective reality and truth which cannot be changed by a not perfectly human "free" will--for there is no "freedom" to change the basic sinful nature of humanity. Such is the basic, foundational difference btwn Christian and Talmudic/Judaic/satanist--the objective view vs. Jew/satanic subjectivism and "midrash."

Judaism Discovered is brilliant. Tempting one to ire as learning the truth about the Talmud may be, the reader appreciates your display of the Christian virtue of temperance, and being explicit in seeking the highest good for Judaics.

We are commanded to love our enemies, even when they have infiltrated, centralized power and overthrown to ruin so many institutions which so drastically impact our daily lives.

I believe that you are correct when you assail usury as the foundation of the distress from which the world presently cries out as one lost in a dark wilderness. More intriguing still is the fact (sourced to you as well) that a certain family of German Christians were the world's premier usurers for some time.

The Talmud and the sinful seductions of the Synagogue of Satan would have no power at all today were it not for Christians falling for the lie that they can somehow fool Christ with lukewarmness while worshiping Mammon. Judaics primarily responsible for all the evil in the world? Not a chance. That title goes first to unfaithful Christians.

"...
If this law was present in Islam it would be massively publicized repeatedly by right-wing Churchianity, which publishes and promotes numerous books, pamphlets and radio and television broadcasts purporting to “expose” and “tell the real truth” about Islam. Yet these Church-goers who are putative “followers of Christ” tend to flee in dread at any thought of issuing corresponding publications relating to the exposure of the contents of the Babylonian Talmud and the creed predicated upon it."

It breaks my heart (for I was once a Christian Zionist myself before realizing Israel was trying to steal the Litani River from Lebanon under the guise of fighting Hezbollah in 2006--which is why God made sure they lost that one!) that so many Christians ARE lukewarm and refuse to even bother looking at the abominations of the Talmud. The Koran is also full of falsehoods, but those falsehoods are the only falsehoods so many Christians will consider. I truly believe these Christians suspect abominations in the Talmud but are afraid (because of a bogus interpretation of Genesis 12:3) to discover the truth of it and call out Judaism (IMHO, Judaism, as with so many Jews, is a walking contradiction), and realize the truth of Galatians Chapter 3--"He who has not the Son hath not the Father, but he who has the Son hath the Father also."

I'm trying to determine if your reading of the Talmud is correct, and I followed up on your reference to Rabbi Moses Maimonides, in Sefer Kedusha, Hilchot Issurei Bia 1:14. This site has source and translation ...
https://www.chabad.org/library/article_cdo/aid/960647/jewish/Issurei-Biah-Chapter-One.htm
The translation :
When a man enters into relations with a male or has a male enter into relations with him, once the corona is inserted [into the anus] they should both be stoned if they are both adults. As [Leviticus 18:22] states: "Do not lie with a man," [holding one liable for the act, whether] he is the active or passive partner.

I used google translate on the source,
And if he was nine years old and one day older than the one who came upon him or brought upon himself a scapegoat, and the younger one is exempt, and if the male is nine years old, Or less both are exempt and fit for the court to strike the great plague of rebellion by lying with a male and even though he is less than nine years old:

It is not clear to me which interpretation is correct, that is, is the adult punished, and the child exempt. I would appreciate it if you would clarify.

Saggy says ....
Here is Sefer Kedusha, Hilchot Issurei Bia 1:14 according to chabad ...
https://www.chabad.org/library/article_cdo/aid/960647/jewish/Issurei-Biah-Chapter-One.htm
"If a minor of nine years and a day or more is involved, the man who enters into relations or has the minor enter into relations with him should be stoned and the minor is not liable. If the male [minor] was less than nine years old, they are both free of liability.45 It is, however, appropriate for the court to subject the adult to stripes for rebellious conduct for homosexual relations46 although his companion was less than nine years old."

And here is the google translation:
And if he was nine years old and one day older than the one who came upon him or brought upon himself a scapegoat, and the younger one is exempt, and if the male is nine years old, Or less both are exempt and fit for the court to strike the great plague of rebellion by lying with a male and even though he is less than nine years old:

So, as I read it, according to chabad - a male who sodomizes an 8 y.o. boy will be stoned and the boy be exempt. Only when both are less that 9 are both exempt.