Subliminals in TV commercial denying them 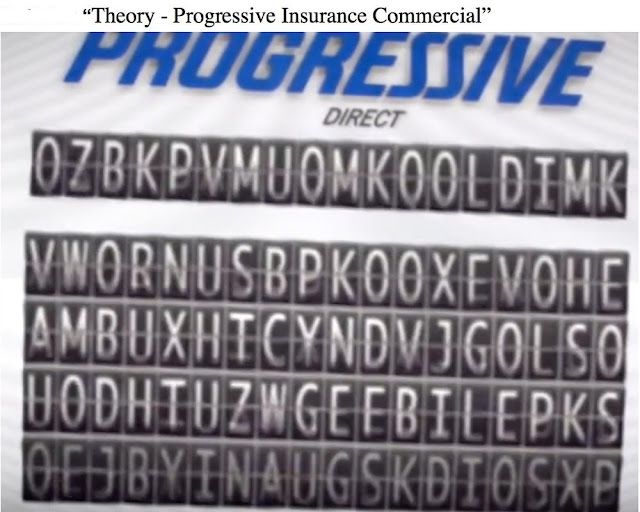 This screengrab from the Progressive Insurance TV commercial titled “Theory” (probably short for “Conspiracy Theory”), was nationally broadcast over the weekend of Feb. 25-26, 2017. The commercial mocks two conservatively dressed men who are shown analyzing TV ads for evidence of subliminal messages — portraying them as middle-aged moma’s boys, and losers so pathetic in their hair-splitting pedantry that they argue over the meaning of the word “awoken.”

The message is, if you want to be able to get a girl and move out of your frowzy old mother’s basement, don't investigate mind control in media; be a conforming consumer. The jokey aspect is intended to distract from the suppressive intent of the ad.

In the commercial the mother lies when she tells her investigator-son, “They’re just commercials.”

On the contrary, this commercial itself contains significant words flashed at high speed at the start of the ad.

The freeze frame (at the top of this page) from one of the first scenes, reveals scrambled letters flashed in less than one second: in the first line is the word “OZ.” In the second line is, “WORN US...KOOX.” The fourth line contains the words “FBI” and  “BILE."

“Just a commercial?” Don’t be hoodwinked.