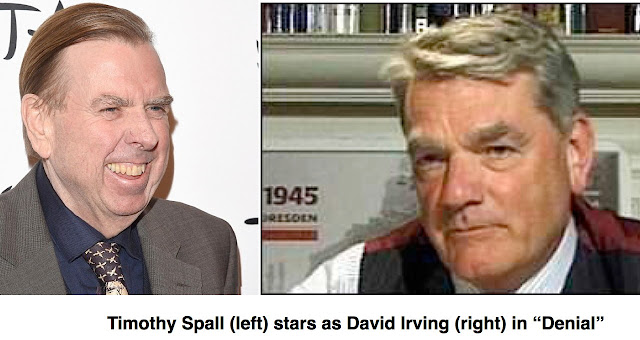 Lipstadt-Irving "Denial” movie: Caught in a lie before the movie even debuts

On Swedish TV in English: Michael Hoffman is interviewed about the new movie “Denial”

Michael Hoffman’s Truth Mission is made possible by sales of his publications and broadcasts, and donations from benefactors.
_______

This may backfire on them. More people may learn about Irving and historical revisionism as a result of this movie.

All publicity is good publicity. It can only back fire in their faces and I am praying for that.

Timothy Spall is a nauseatingly pathetic actor, whose character portraits are sometimes revolting in their overblown efforts to portray the Englishman in an overwhelmingly negative light, as Hollywood Jewish directors always delight in, and he takes the money to do that, what an absolute traitor and sellout.

Yes, all publicity is good publicity. (I know this from personal experience.)

I heard Irving speak in Portland about twenty years ago and it was quite an experience. The large police turnout, the paid protesters and the skinhead guards created the appropriate atmosphere for a fascinating lecture.

Sounds to me like you are the man to write that trial book.

Isn't it ironic that the actress they chose to play Lipstadt, Rachel Weisz, had this to say in 2001 about being a Jewish actress in Hollywood:

EMMA [interviewer]: Well, it's that Jackie Mason joke about how no Jewish woman wants to look Jewish: "'You think I look maybe a little Italian, I look a little Russian, perhaps I can be Spanish?' … 'You look Jewish!'"
RACHEL: Hollywood's run by Jews. I was advised by an American agent when I was about 19 to change my surname. And I said "Why? Jews run Hollywood." He said "Exactly." He had a theory that all the executives think acting's a job for shiksas.
EMMA: Of all the self-loathing Jews in the world, the most self-loathing are the Hollywood Jews. They don't want to see images of themselves on screen. That's why Lauren Bacall had to hide her identity, and Winona Ryder changed her name from Horowitz.
RACHEL: In some way acting is prostitution, and Hollywood Jews don't want their own women to participate. Also, there's an element of Portnoy's Complaint — they all fancy Aryan blondes.
http://www.indexmagazine.com/interviews/rachel_weisz.shtml

More lies from the Synagogue of Satan. A single day cannot pass without some absurd article about WWII and Hitler's Germany, always done in a a negative light ( Haven't you heard? The old Germans were monsters and the new Germans are no longer German). How can anyone one doubt that they own the mainstream media, all one has to do is look at how they are destroying Trump and praising Hillary.

I have had better chances convincing people the Holohoax was a fraud of late than years ago. We are beginning to win on this and 911. When I tell people that Wall Street has stolen so many of our pensions that they must be planning to reduce America's population by the tens of millions, they do listen.

I went to the trailer and left my 10 cents (inflation, don't cha know) about jews.

Irving won a long time ago, we just have to keep carrying the torch.

Why do you write “jews” in the lower case? To show your contempt for an entire people? How does this help Mr. Irving, or anything else?

Second, Irving has won very little unless his supporters become as active as his highly energetic detractors.

Hoffman: showing contempt for the enemy who is attempting to exterminate u is NECESSARY war measure, most appropriate as u demonstrate by ur own analysis and exposition of their Talmud which is nothing less than war program against humanity, God, reality, truth, reason, civilization, etc. Contempt then is not only appropriate and just, it's necessary in the obligatory war effort. And of course, we see once again u're here defending the enemy trying to murder the people, pretending thereby that u're "moral," evidently.

Hoffman, truly, it's TRAITORS like u who are just as responsible as the Jew monsters themselves for the destruction wrought upon oppressed humanity as we see. And in order to remove these Jew monsters, we see it's necessary to remove traitors like urself along w. the Judeo-Christian heretics and traitors, free-masons, homosexuals, et al.

And once again, we see u demonstrate worst enemy of truth (= Christ, Gosp. JOHN 14:6) is such as ur phony "moralism" and monstrous idea of "good," the typical Pharisaic, not to mention heretic (Pelagianism). What a joke u really are.

Because it contains a death threat, we have elected to publish, for the record, the preceding “comment” by “apsterian” (who is a registered user of Google’s “Blogger" service, though this individual has concealed his or her identity on Blogger).

“...we see it's necessary to remove traitors like urself along w. the Judeo-Christian heretics and traitors, free-masons, homosexuals, et al.”

This is now a matter of record and we are attempting to ascertain this person’s identity.

Ho hoo ho ho, Hoffman, u're such a joke, a coward, heretic, Pharisee, and traitorous enemy of the people working to defend themselves against ur precious kike filth, ho hohoho ho

Though I've been a political activist for two decades, I wasn't really tuned in to all this Holohoax stuff until last year. However, I hit the ground running and am now proud to call myself a Holocaust questioner. I think the Germans did persecute the Jews - and for good reason - but, like so many other people, I don't agree with all the details of the official account(s).

In the meantime, there are ways to fight back, and they aren't limited to the BDS movement. Check out my Jewarchy video @ https://www.youtube.com/watch?v=9zC8oaYcvPU&spfreload=10 and help spread the word.

In your video you are setting up a category of “Jews” to hate. Who wants to do that? How could such a thing have any appeal to people of good will? You’re rendering yourself a qualified Jew hater. God help us.

You write, “The Germans did persecute the Jews - and for good reason.”

That’s disgusting. You’re defaming the German people by equating them with the National Socialists and their persecution of human beings labeled “Jews.”

I am opposed to the persecution of any human being. Criminals can be tried and convicted of rape, murder, robbery, kidnapping etc. and stand trial with equal rights before the law — Judaic criminals as well as non-Judaic. But persecution? It's an antediluvian relic of troglodyte provenance.

Let’s work for Truth and Justice in Palestine, and with regard to the authentic history of Communism and National Socialism, without resorting to hatred and persecution, which are attitudes of the rabbis, and not of a Christian people working for a better, more positive future.