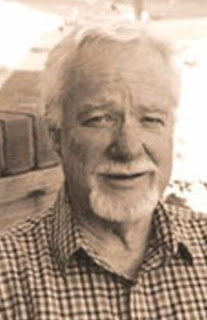 Bradley Reed Smith, a pioneer of revisionist history journalism, has died at the age of 86. I came to know Bradley when he worked for me when I served as Assistant Director of the Institute for Historical Review (IHR) in Torrance California in 1985. In addition to being a first-class writer, he was an extraordinary human being. I called him “Falstaff” for his girth, chin whiskers and sense of humor. He was a humble man of great courage.

It was years before I discovered that he had been a combat veteran of the Korean War, an ambulance driver in the Vietnam War and a former Los Angeles County Deputy Sheriff. I knew him as a libertarian playwright, ex-beatnik bookstore owner prosecuted for selling some off-color novel, and the first non-Right wing individual I encountered in revisionist ranks.

His newsletter, Smith’s Report, originally founded and financed by Willis Carto, combined wit and skeptical research into certain of the  homicidal operations of the Nazis. Together Bradley and I stormed the National Writer’s Union Conference in New York City, demanding to know what the assembled cosmopolitan elitists were doing to protest the 1984 arson on the IHR, which had destroyed its entire $400,000 stock of dissenting history books. The only writers who paid us any attention were a black author from South Africa and the late Alexander Cockburn. Otherwise we had a merry time fending off the  spittle and death threats spewed at us by a gaggle of irate Zionists. It was great fun.

His best work was on America’s college campuses, where he succeeded in placing numerous large advertisements in student newspapers questioning key aspects of the World War II Allied dogma. His phone calls to student editors were so folksy and disarming that he managed to stiffen their resolve to resist a tidal wave of censorship pressure. He troubled the powers-that-be to such an extent that the New York Times entered the fray to condemn his activism. He also appeared on national television on the Phil Donahue program.

In spite of these achievements, like most revisionists he was chronically short of funding and due to these financial difficulties, Bradley, who was fluent in Spanish and married to a Mexican lady, was impelled to relocate from California to a border town in Mexico just south of the California state line. He was comfortable there, where he had once been a bullfighter  (!) and from his base in Mexico he continued to publish Smith’s Report until last year, when German-American revisionist Germar Rudolf and his associates assumed responsibility for the publication as Bradley began to lose his battle with cancer.

Many highly active or prominent World War II revisionists are offered violence at some time or other and Bradley faced JDL thugs with intrepid defiance. I remember him rising at a public meeting to protest the expulsion of a revisionist college student. An ADL representative was present to advocate for the student’s removal.  More than a few Los Angles area Zionist terrorists were present  when Bradley stood up to say that the ADL rep was “a horse’s ass.” The audience roared. Bradley returned to his car safely.

Someday, when our people recover their sanity, men like Bradley Smith will not have to die in poverty. Someday he will be honored for his struggle for the First Amendment and skeptical inquiry. Until then, let us kindle his memory — and example.
________