Is there a tradition of lying and deceit in the Church?

How do we define a truthful Christian? 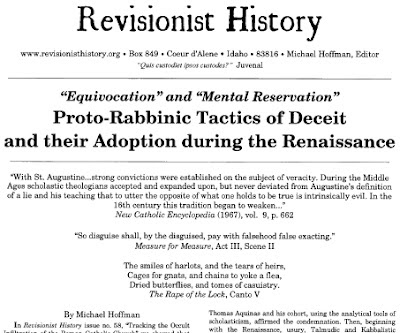 Why can't the modern Catholic hierarchy give a straight accounting of the child molestation plague?

Why do Protestant fundamentalists deceive their congregations regarding what the Bible says about the poor, social justice, usury and counterfeit Israel?

Michael Hoffman tracks the source to Renaissance "casuist" theologians in the Church, imitating the spirit of the Kol Nidrei rite, during a time when the Church was also accommodating Kabbalism, permitting the publication of the Talmud and breaking its ancient commitments against usury.

From the days of the Gospel to those of St. Augustine and Aquinas, the Church had stood firmly against all forms of deceit and dissimulation.

But starting in the 16th century, rabbinic-like techniques of "equivocation" and "mental reservation" seeped into Christendom with devastating effects that are still with us. Follow the trail through the Jesuits, Puritans, Shakespeare, St. Alphonsus Liguori and Pope Innocent XI. Revisionist history at its best!

"A Diorama of Our Demise”
A review of the new book, Ritual America: Secret Brotherhoods

"The Reinvention of Craig Heimbichner"

To purchase this issue alone, or a subscription, click here
http://revisionisthistorystore.blogspot.com/

In your review of "Ritual America: Secret Brotherhoods," you mention that "Wayne" is an important name within Twilight Language. Where does one find this type of information?

In addition, are there any additional sources on the "Psychic Highway"?

There’s nothing published in a book, so far as I know, about the word “Wayne.” In the 70s I started to pay attention when a drummer in a transvestite rock band was named “Wayne County.”

Jim Brandon has some information on the area through which the “Psychic Highway” or “Burned Over” district runs. I was born on it so naturally I am familiar with it.

Thank you. On your recommendation I checked my copy of Brandon's "Weird America" and while I didn't spot a specific reference to the Psychic Highway, he did include some details on some of the locations within that area, Wayne County specifically.

Speaking of which, his books are long overdue for reprinting. I'm sure these economic times have hurt him as it has every regular person, but here's hoping at some point he'll be able to get his works published again.