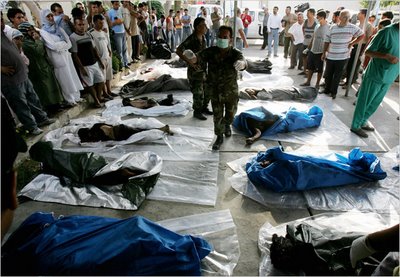 Fleeing refugees, including women and children, were cut down on a road adjacent to the Lebanese-Israeli border by Israeli bombs as they left the village of Marwaheen. The bodies of several Lebanese children, one headless, were sprawled on the ground. The Washington Post said 18 were killed in the afternoon Israeli attack, including nine children.

(On) Sunday, in St. Petersburg, Russia, Secretary of State Condoleezza Rice told news services that U.S. officials are concerned about civilian casualties in Lebanon and that she had spoken to Olmert to say "we would hope that Israel would be mindful of and restrained in its operations so that innocent civilians do not suffer.”

...the asymmetrical nature of the conflict was laid bare Saturday: For each attack by Hezbollah since it captured two Israeli soldiers in a cross-border raid, Israel has inflicted a far greater price. It has systematically dismantled the country's infrastructure, displaced thousands of residents…” Washington Post, July 16, 2006

At the Sahel Hospital, in Beirut's southern suburbs, Mohammed Ibrahim lay in a bed with injuries to his forehead, shoulder and right leg and burns on his back, suffered when an Israeli missile struck a bridge. The wiry 26-year-old from Syria had been walking from his apartment for dawn prayers at the Martyrs' Mosque.

....They (Israelis) don't want to strike civilians? Then why are they doing it?" asked Mohammed Fathi, a 37-year-old resident of south Beirut. He stood outside Harkous Chicken, the restaurant where he works as a chef. The smell of peppers mixed with the reek of cordite, and workers swept shattered glass off the street near a bridge destroyed in a pre-dawn (Israeli)airstrike. The facades of nearby buildings were sheared off, and cars with broken windows sat parked along a street strewn with debris.

Lebanese of all sectarian and political stripes point out the same piece of personal history when they talk about Hezbollah chief Sheik Hassan Nasrallah. "There's something you should know about him," they say. Then they tell how Nasrallah's son was killed fighting against the Israeli occupation of southern Lebanon in 1997. They speak with admiration of a stoic Nasrallah who eschewed sympathy and insisted that his son was like any other soldier who died in the battle.

In a region awash in cronyism and corruption, the sacrifice of a son for nationalism gave the Shiite Muslim cleric a deep well of political currency among people from opposing sects and hostile political movements. ...The ...Lebanese ...thanked Nasrallah for their liberation from Israel.

...Even the group's political opponents, those who advocate the disarmament of the militia, are always careful to temper their complaints with praise for the "resistance" role in purging Lebanon of invaders..."He's our only statesman," said Amal Saad-Ghorayeb, author of Hezbollah: Politics and Religion and a professor at the Lebanese American University. "Whether we respect him or not, if we have one figure in Lebanon who can claim to speak on behalf of Lebanese, it's him."

“...We face two choices, not as Hezbollah, but as Lebanon, its government, army and politicians," he said Friday. "Either we succumb to the conditions that the Zionists are demanding …or we remain steadfast and count on God…"