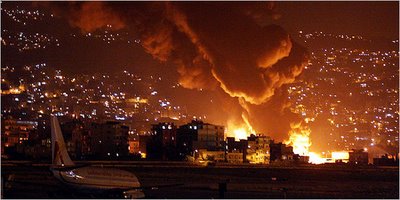 Beirut's Hariri Airport after it was bombed by Israeli Terrorists

Stephen J. Hadley, Bush's national security advisor, said Israel had been asked by the U.S. to respond "in such a way to minimize collateral and civilian casualties."

The voice of Sunni-Arab, Shiite-hating billionaires living in indolent, stupefying luxury beyond the dreams of Midas, concerning the struggle of the Lebanese resistance against the Israeli holocaust juggernaut:

"Saudi Arabia...issued a statement placing blame on Hezbollah and its Iranian supporters. 'A difference should be drawn between legitimate resistance and rash adventures carried out by elements inside the state and those behind them without consultation with the legitimate authority in their state and without consultation or coordination with Arab countries,' the official Saudi Press Agency reported the statement as saying. 'These elements alone bear the full responsibility of these irresponsible acts and should alone shoulder the burden of ending the crisis they have created."
-Los Angeles Times, July 14, 2006

Friday's attacks killed three civilians, police said, bringing the death toll in Lebanon since Wednesday to 61 people, nearly all of them civilians. At least 165 people have been wounded....In Lebanon, frightened civilians struggled to flee the airstrikes, an increasingly difficult prospect after the airport was bombed repeatedly and the main highway to Syria was destroyed...

...Friday's (Israeli) bombing struck the Jiyeh power plant...Noha Ibrahim, 48, said... "They want the two prisoners, and they're going to destroy the country trying to get them"......Hezbollah said the captives would be turned over only as part of a prisoner exchange -- an option Israeli leaders say is out of the question.

In imposing the military blockade of Lebanon, Israeli military officials are employing the same terminology they use to describe restrictions that Israel sometimes imposes on the Gaza Strip and the West Bank. "We have decided to impose a closure on Lebanon in the air, in the sea and on the ground," Maj. Gen. Udi Adam, head of Israel's northern command, said at a news conference.

Hoffman's comment: Lebanese have amnesia concerning past Israeli holocausts (for example, against the civilian population of Beirut in the summer of 1982, particularly August) and will forget the current Israeli atrocities as well:

"We're used to it,' said Baram, crossing the dirt path in a battered Mercedes taxi. 'The battle will eventually end, and the people will act like nothing ever happened. It will go back to the way it was before. People who are accustomed to this type of thing tend to forget,' he added.” -Anthony Shadid, Scott Wilson and Debbi Wilgoren,  Washington Post, July 14, 2006

The Lebanese have been thoroughly trained through a very long civil war (instigated by the Israelis in 1978)to become the sacrificial sheep that they now are. And so the Luciferian sanhendrin is holding another great sacrifice, not of Palestinians this time, but from another flock which contains both Muslim and Christian blood living in an independent (more or less)and recognised state. Through this means they hope to further their hypnotic grip on the region, and over the rest of us dumb, stupid livestock. And it's working rather well for them, is it not?