Israeli Holocaust Against Gaza in Pictures

The following photos from the current Israeli holocaust of 2006 are evidence of Judaism's American-backed, low intensity genocide against the Palestinians is a matter of regular business; a perennial phenomenon, often inflicted in the midst of ceremonies memorializing The 'Holocaust" perpetrated by the Nazis. The Israelis and their US support team can see no parallels.

You cannot terrorize Palestinian civilians (the media often call them "bystanders") forever, without reasonably expecting to be terrorized in return; although according to modern western law, terror used by Judaic partisans against Nazis during WWII was not illegal, but in fact, deemed heroic. 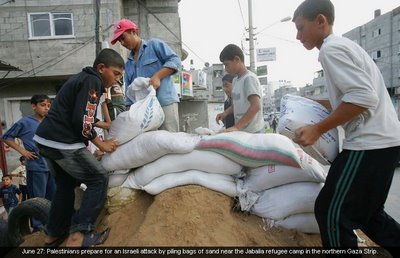 JUNE 27: Palestinian children in the Jabalia refugee camp prepare for the Israeli onslaught. 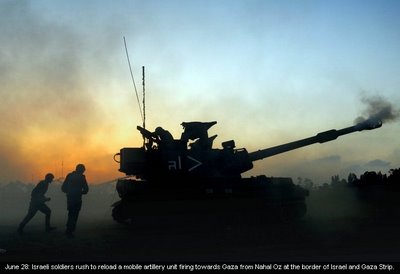 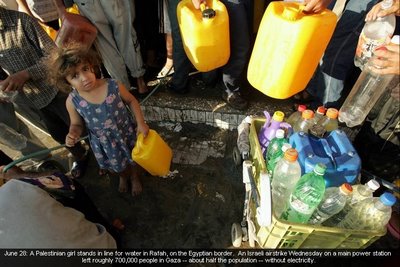 JUNE 28: A Palestinian girl stands in line for water in Rafah, after Israeli terrorists bombed the main power station, leaving half the population in Gaza without electricity or the means to pump water. 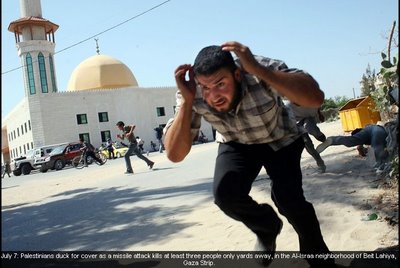 JULY 7: Palestinian civilians run for cover as an Israeli missile kills three people only yards away in the Al-Israa neighborhood. 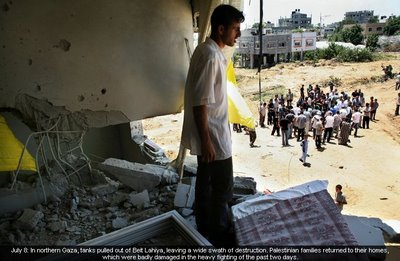 JULY 8: A Palestinian youth surveys the rubble of his family home in Beit Lahiya after Israeli tanks went on a rampage in the village.

After America sees this carnage the IDF is inflicting upon women, children, and innocent bystanders, (most of the time referred to as terrorism), I cannot see how the people of America can possibly continue to dismiss this horrible treatment which the Palestinians are receiving. I'm sure there was and I'm sure there will be more children joining anti-Israeli groups and many more "human bombs" sent to blow up Israelis with most being innocent civilians but Israel knows that was and still is the extremists way for the Palestinians to fight one of the strongest militaries in the world and the strongest in the region, possessing nuclear weapons and a vast array of high-tech artillery. Hopefully this documentation of these atrocious crimes by means of pictures and hopefully video will help Americans to realize, in the Middle East, Israelis are not the only civilians who suffer from non-sensical, barbaric attacks.