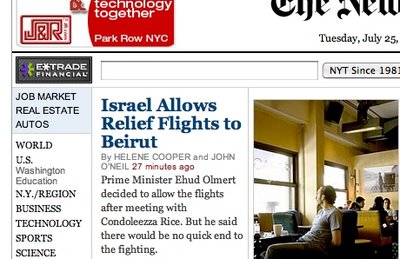 "Prime Minister Ehud Olmert decided to allow the flights after meeting with Condoleezza Rice. But he said there would be no quick end to the fighting.” (Front page, NY Times online, July 25 10:46 am ET; emphasis supplied)

Actually, the overwhelming aspect of the military experience in Lebanon right now is Israeli bombing. But the New York Times, ever mindful of the need to prevent future historians from drawing parallels between the tactics of the Israelis against the Arabs and the tactics of the Nazis, uses the word "fighting" instead of bombing to characterize what the Israelis are doing to Lebanon.

"Fighting" connotes a battle between military forces with soldiers as the main casualties; bombing suggests the dominion of a mighty power over a weaker nation with consequent loss of civilian life. The latter is the chief aspect of the Lebanese experience at present, not gun battles between Hezbollah and the Israeli army.

It is the Israelis who have chosen to indiscriminately bomb Beirut and much of southern Lebanon. Therefore it is the Israelis who should be made to pay the price for these war crimes by having their actions termed exactly what they are: bombing. To report that 'Olmert decided there would be no quick end to the bombing,' reveals the horrible reality of the Israeli attack on Lebanon and the brutal indifference to human life of the Israeli leadership.

To report, as the Times does that "Olmert decided... there would be no quick end to the fighting" covers up the reality. With help from their Zionist cousins in New York, the Israelis can escape the consequences of their crimes by having them described in bland, generic terms as "fighting."

This is particularly perverse in that, more than sixty years after the end of World War Two, the New York Times continues to report "The Holocaust" on a weekly basis, with the most minute examination of every gruesome detail.

Any moderation of that reporting would be regarded by the Times as a "desecration of the memory of the dead." But the New York Times has no qualms about whitewashing an Israeli holocaust in Lebanon which does more than desecrate memories: it leads to more Arab civilian victims in the present.

But since the sub-rosa message of the WWII "Holocaust" is that Judaic suffering is unique, and superior to the experience of the suffering of all other nations, it is unlikely that the zealous "Holocaust" cultists at the New York Times will concede any similar status to the Arabs of Lebanon.

The party line is that the slaughtered Lebanese women and children are mainly victims of bad luck, caught in a "crossfire" between opposing armies. There is nothing particularly unique in that; wars are the way of the world. The Lebanese will be pitied by New York liberals, but only as non-combatants in all wars are pitied.

The special circumstances of mass murder of civilians through deliberate targeting cannot apply to "Israel" because it is a Holy State peopled by “Survivors," and other "Holy People.”

To report the truth that "Israel" is perpetrating mass murder in Lebanon through the bombing of the civilian population would be a "desecration of 'The Holocaust," and a sacred religious dogma like that — the only religious dogma still reverenced in the otherwise agnostic West--is a taboo that cannot be violated.

Dreyfus Was Vindicated, but What of the French?

To: Hoffman 'anti-communist' blogger!
Very suprised to see that you have succumbed to the virus of commu-nazi psy-war active measures and
dezinformatsia!