Hell on earth, courtesy of the morally superior Israelis 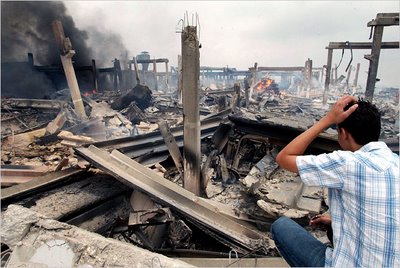 
TYRE, Lebanon July 17 - On Sunday, at least 10 people, including children, were killed when a (Israeli) bomb targeting the civil defense headquarters here demolished the two top floors of the building. Their mangled bodies were pulled out of the rubble Monday
.
Not far from here, near the village of Marwaheen, a van filled with families fleeing the bombing was hit in an air attack Saturday, killing 15 of 20 aboard. And Monday afternoon three children who were swimming in an irrigation canal were bombed on the edge of the city, severely injuring them. Hours later, another group of children were injured in an identical incident. Late Sunday, a residential building adjacent to the Amel Hospital on the outskirts of town was bombed repeatedly, locals said.

...At the Amel Hospital, Dr. Ali Mroue, in a rare moment of quiet, took stock of what he had seen in recent days: decapitated bodies, severe burns, disfigured faces. He has lost 25 patients, he said, but has saved 100.

But most of all, he lamented the death of a two-year-old girl, whom he tried desperately to save. She had severe burns on half her body, her eyes were perforated, and she had internal bleeding, but fought to live, he said.

...He was surrounded by families that rushed to the hospital for care and stayed there for safety. Hundreds of men and women lay in the hospital basement, not sure where to go and not sure when they could return home.

“We drove and drove and the bombs kept coming behind us,’’ said Saada Ashour from the nearby town of Shaqra, who raced here with her family of five.

...Ali Khalil’s family was in his aunt’s house when a bomb hit the house on Saturday morning, he said. The family rushed to the hospital in a convoy of three cars with several of the injured. The rest of the family decided to camp out in the basement too.

...Yet even the confines of the hospital did not prove enough when (Israeli) warplanes hit a residential tower adjacent to the hospital Sunday evening, bringing the structure down. Several bodies were still buried beneath the rubble Monday.

A line of cars packed with families and piled with bags was seemingly endless on the mountain passes leading out of here.

Khalid Mehdi, 50, a fisherman... was one of those who stayed behind. The trip to Beirut had reached $500, an impossible sum for someone of his means, he admitted. But even if he could, he would not leave, he said, because he had to defend his home.

“I’m better off dying here,’’ Mehdi quipped as (an Israeli) fighter jet broke the evening quiet overhead. “You can’t go to hell from here because you already are in hell.’’

"Judaism exempts itself from the rules it demands for everyone else.” — Michael  Hoffman

but then, to you that must be a compliment.
pity on your soul.

Good blog, among the sea of disinformation about the gangsterism taking place in and around Palestine.

Sitting snugly in western Europe, one has to rely on western media for the latest news. Unfortunately, but unsurprisingly, the 'message' from many mainstream media providers is racist support for whatever the bloodthirsty Zionists do.

Yesterday, one on-the-spot reporters for ITN gave it away when he said - in the context of the IDF's activities - : "...we're fighting this war...". So we know where they stand, then.

Another channel (Sky News, I think) ran a ridiculous segment describing Hezbollah missiles, as if they were talking about the Arms Race between the USSR and the US. And Iran and Syria were blamed for making these missiles. Funny, not a mention of the US-made weapons available to the IDF.

There's a very troubling theme underlying most western news coverage: it's usually called racism/incitement to hatred. I'm afraid it's building up to a call for a 'justified Holocaust' - against Arabs, for no reason other than the originial 'holocaust victims' demand it.

I could go on with examples of blatent media bias, but the day is not long enough.

Thanks, Michael, for your efforts and your research.